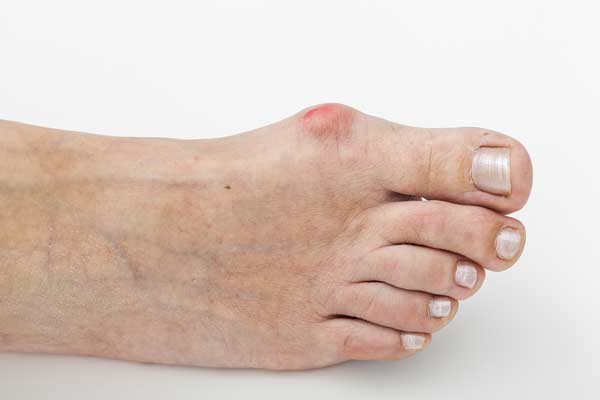 Bunions are often described as a bump on the side of the big toe. But a bunion is more than that. The visible bump actually reflects changes in the bony framework of the front part of the foot. With a bunion the big toe leans toward the second toe, rather than pointing straight ahead. This throws the bones out of alignment, producing the bunion’s “bump.”

Bunions are a progressive disorder. They begin with a leaning of the big toe, gradually changing the angle of the bones over the years and slowly producing the characteristic bump, which continues to become increasingly prominent. Usually the symptoms of bunions appear at later stages, although some people never have symptoms.

There are many factors which can contribute to the development of a bunion, the most common causes include genetic factors, poor foot mechanics, high-heeled or narrow footwear and trauma to the toe.

Symptoms occur most often when wearing shoes that crowd the toes, shoes with a tight toe box or high heels. This may explain why women are more likely to have symptoms than men. In addition, spending long periods of time on your feet can aggravate the symptoms of bunions.

Bunions do not generally get better if left untreated. Early treatments are aimed at easing the pain, and slowing down the progression of the bunion, but they won’t reverse the deformity itself.  Treatment options may include:

Footwear Education and Modification Wearing the right kind of shoes is very important. Recommendations are that the forefoot easily fits within the width of the shoe and there is adequate cushioning and arch support. Soft materials such as smooth leather, suede or fabric will also help to reduce irritation to the area.

Padding The use of pads and cushions to reduce the pressure over the bone can also be helpful for mild bunion deformities. Pads placed over the area of the bunion can help minimise pain.

Medications Nonsteroidal anti-inflammatory drugs (NSAIDs), such as ibuprofen, may help to relieve pain.

Orthotic Devices Podiatrists can prescribe customised orthotic devices that help reduce the stress on a bunion and control biomechanical factors which cause them.

When is Surgery Needed? When the pain of a bunion interferes with daily activities, it’s time to discuss surgical options with your Podiatrist. Together you can decide if surgery is best for you.